Sankhadip Das for coming up with the idea of transcribing Arun Shourie's main talk, writing the first draft, and sharing it with the forum. Others in the forum and then the HHG team have reviewed the material, which has gone through additional hours of editing. There remain tiny sections where the audio is unclear. We have highlighted certain key passages. The Youtube video is embedded at the end of this post. If a keen ear can spot key missing words, please add a comment and we will update the post.
[March 5: minor transcription updates]

Arun Shourie delivered a thought-provoking and witty lecture on January 29, 2014 at the Vivekananda International Foundation (VIF-India) meet in New Delhi, while releasing Rajiv Malhotra's new book 'Indra's Net: Defending Hinduism's Philosophical Unity'. The written word is powerful and often remains embedded in our memory longer than the same information received by listening to a lecture. We hope this transcript will complement and amplify the experience of listening to Arun Shourie ji's video lecture on 'Indra's Net'. 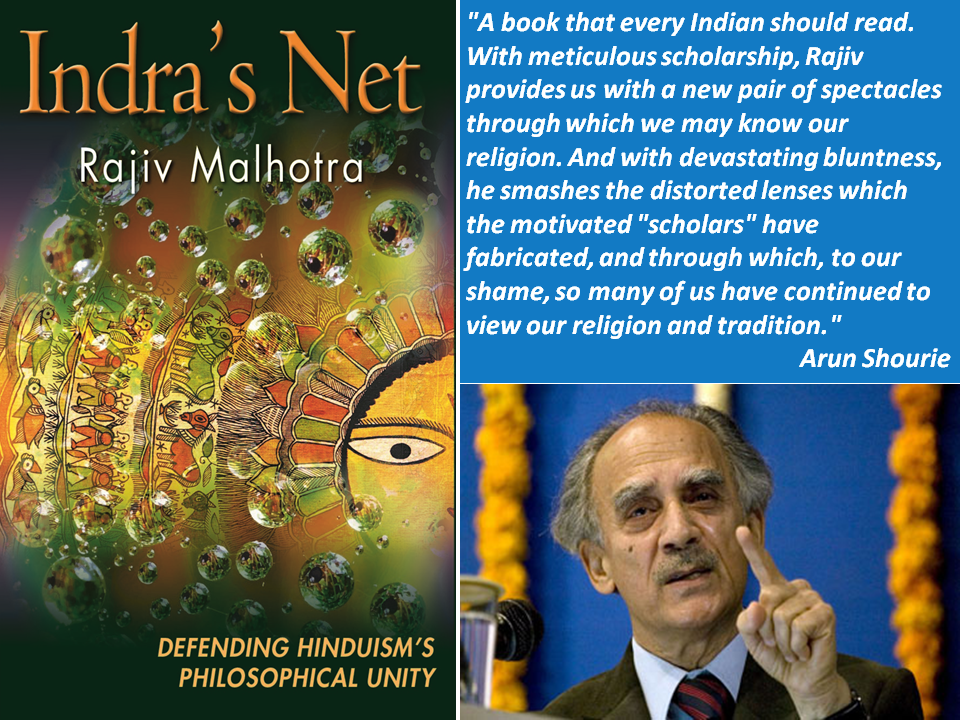 Not only that you see, there are contemporary accounts. We have one of the best people I know, knowledgeable on Islam and Islamic history or history of Islamic rule. Islamic historians, contemporary historians, court historians, writing accounts contemporary with the events are full of slaughter, of destruction of temples and so on. So, how is that to be explained? The word that has been used, I was quite surprised. They say that this proves that this was not being done. The accounts claiming that all this has been done by our great king, is because he was not doing this [laughter in the audience]. Why then did you write it? Because it was trying to table verbal virtue for him. But if that one inscription shows that after losing a wager, the Jains had to vacate a particular temple for the local Shaivites then it will be Hinduism will be intolerant and the ridiculous lengths to which people will go… Rajiv documents this in Swami Vivekananda’s case or in the case of other when they make ANUBHAV, direct personal experience as the criterion or as the mode, then that we are only trying to ape the West and ape Western Science. He asked was Patanjali aping Western Science or West? Was Ramakrishna Paramhansha aping the West or Western Science or Ramana Maharshi? So, in every one of these things I could go on with the details. It’s a book which is a must for every Indian. We must see our tradition through the spectacles that persons and specially Rajiv Malhotra has constructed for us. And it was a particular education for me because I had focused only on the Marxist historians and felt that they were regurgitating, sort of swallowing and vomiting what had been written by some Soviet historians. But I then now realize after reading Rajiv’s books that they were actually swallowing and vomiting what many of these so called Western scholars in America and in Austria, or Germany had written with a purposive agenda. The main lessons from this book, I’ll spell out three and I’ll sit down after that.
One is, there is reason we should look to the future with confidence even in the religious sphere because in the case of Christianity, Rajiv points out, attendance is falling by the hour not even by the date. In places like Belgium, it has almost completely disappeared, the attendance in churches. Islam is tearing the Muslim world apart and even more important, it is a very important and a point of great insight which Rajiv has made that out of the religions, Hinduism and Buddhism, Indic religions are the closest to the spirit and substance of science. Just as the goal of science is the understanding of outer reality, its method is experimentation and peer review, its means is the laboratory, so also Indic religions are the science of the inner world. Their means is personal, direct experience and their peer review is unending and that is how the religion keep evolving and its method is entirely the scientific method of empirical verification through direct personal experience and the means… just that the means for those persons are laboratories and observations through instruments,... here a very good phrase Rajiv uses that the means, ours, was the living laboratories of these sages. They looked inside their own mind and came up with great formulations and great insights. So, time is on our side and we should do and we should work on these matters and practice our religion with great confidence. If something requires reformulation, we should reformulate it and say yes, we have reformulated it. Because this is the new formulation, this is what is required for the time. If we need to endow old words with new meaning we should do that with confidence. We must have and I am sure you will have after reading Rajiv’s book, a little contempt for these tendentious scholars.

mujhe yaad hai, yahan Chandni [?] auditorium mein ek music festival chal raha tha. Siddheswari Devi ji gaane ke liye baithi thi. Taanpura tune ho raha tha, tabla tune ho raha hain, light dim ho gaye hai. Somebody got up from the audience, Siddeshwari Devi ji, nahin, nahin, raag yeh wala gayiye. She sang what she had planned to sing. Khatam ho gaya, log taliya baja raha hain. aab dushre gane keliye tune ho rahe hain. light phir sey dim ho gaye. wohi shaks phir sey utha, Siddheswari ji who to bahut accha tha, magar aap yeh gaayiye, She again sang what she wanted to sing. 3rd time he got up and Siddheswariji told arre yeh hai kaun. Toh hamhe bhi yehi attitude hona chahiye – ki Yeh Hai Kaun? [applause and laughter in the audience]
And the main thing to do is to succeed. Even in intellectual things nothing succeed like success. Not one of these scholars will fabricate and propagate the type of nonsense that he does about India, he will never do it about China [audience concurs]. Because China has become strong and the scholars know if they write things about China they will lose their livelihood because they will lose their access to their sources. So, the important thing is to succeed and then everything will follow and one reason, final reason for being confident is that because of the work of Ram Swarup, Sitaram Goel, Koenraad Elst, David Frawley, Rajiv Malhotra – because of the work of these persons, the corpus is now reaching a critical mass. So that we can think that within few years we will have two [series]
One, A library for India, and a library of India. We should aim for those but the prerequisite is that we should be like Rajiv Malhotra, we should know our tradition, we should know our religion. The reason on account of which this kind of fabrication has prevailed for so long is that we have not known our tradition, not known our religion and we have known these only through the eye, we have seen through the distorted lenses which were fabricated by these tendentious scholars, these missionaries in mufti.
So, Rajiv, certainly on my behalf, and I’m sure on the behalf of every one, and on behalf of all of your readers Thank You.


[prolonged applause. The main lecture ends here. Arun Shourie then has some interesting observations on how Indians misinterpret "Vasudhaiva Kutumbakam" (the whole world is one family). The HHG team has transcribed this portion for the sake of completeness and also because this segment has a very important message for the millions of gullible Indians wallowing in the myth of sameness].

It is not anti-christianity, anti-Islam or anything like that. It is, the book is, it's a wonderful thing both about cosmos and life, this metaphor of Indra's Jaal and also about Hinduism. Every part reflecting every jewel all other jewels. Therefore if anything is changed [or disturbed], it is reflected all over, etc.  But he also makes a very important point in the end. Which illustrates... Rajiv illustrates both his style and forcefulness of his argument. It [is an illustration of what he was] telling us in the end. In our anxiety to be liked. we keep repeating words without understanding their implications. Humne Sabse pehle kaha 'Vasudhiva Kutumbakam' [comment on India's tolerance] .... Sari duniya to humne ek mana. So I will read to you where actually says where this word comes from [reading from pages 295-296 of Indra's Net].
"In one story in the Hitopadesa, a cunning jackal, trying to create a place for himself in the home of a naive deer says ‘Vasudhaiva Kutumbakam’ in his appeal to the deer. The deer ignores warnings from other animals, who caution that it is unwise to trust someone at face value without first ascertaining his history, nature and intent. Upon deceitfully acquiring the deer’s trust and moving in his home, the opportunistic jackal later tries to get the deer killed. Indeed, the moral of this story is that one should watch out for cunning subversives . Blindly trusting those who preach ‘universal brotherhood’ can lead to self-destruction.
[a brief comment here before continuing]
The Panchatantra encodes this same message in a different story. In this version, the man who utters ‘Vasudhaiva Kutumbakam’ is described as a murkha (‘idiot’). He is determined to bring a dead lion back to life, and disregards a wise man’s warning about the dangerous consequences of such an act. The idiot and his accomplices feel moved to resurrect the lion after citing this sentiment of universal brotherhood among all living things, and hence end up being eaten by the lion they help. The wise man lives to tell the tale.  Clearly, the lesson taught in these stories is not one of blind adherence to a policy of unilateral disarmament." [appreciative applause]

...Bahasa is a creation of the Indonesian freedom movement in the 1930-40s. Mother country Italy ke bare me baat kar le [laughter in the audience]. Modern Italian is [Anderson] says modern Italian is a creation of the television age. But we are on the defensive ki saab, Instead of celebrating the fact, that yes, we have so many languages, we get defensive, and that's how this book is so invaluable. It takes us to the root of our defensiveness and that is ignorance about [our own systems]. Aur isi liye, bahut important hai ki Poison pill bhi fabricate karni chahiye, magar jo poison, jo dusron ki pills humne swallow kar li hai, aur repeat karte rehte hai Vasudhaiva Kutumbakam, uska bhi meaning asli mein dekhna chahiye!
[end of transcription]
Original Youtube Video Sources