Abstract of Two Important Talks by Rajiv Malhotra This Month

Rajiv Malhotra is currently in India addressing more than thirty talks, workshops, and discussions of various kinds. Given below is the abstract of two talks this month that is being delivered to extremely important audiences.

Rajiv Malhotra is a US based researcher and author on the subject of Indian civilization and its place in the world, especially as seen through the lenses of history, politics, religion and philosophy. Prior to this, he was in IT and telecom industries where he held positions as corporate executive, management consultant, and finally as entrepreneur owning companies in over 20 countries. He took early retirement in 1995 at age 44 and established Infinity Foundation in Princeton, USA, which is a think tank focused on the representation of Indian civilization in academics, media, education and public affairs. He has authored the following three books recently: 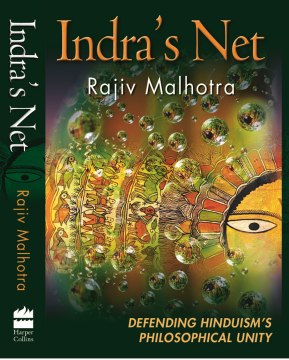 Additionally, he has been the chief protagonist in several other books, and is actively blogging on Huffington Post among other forums. He has a prominent presence in social media, and he frequently goes on lecture tours of USA and India.


The Philosophical Unity of India

I will draw on my three books to discuss the issues of India's unity in the context of the geopolitical encounter of civilizations. A country's unity could be based on many kinds of glues. Japan, for instance, has a homogeneous racial/ethnic foundation; China has Mandarin as a common language (though it was imposed over a previously diverse linguistic geography some centuries back); France considers French an important asset in creating the sense of nationhood. USA has a powerful belief in its "exceptionalism" rooted in a deep sense of history. Major nations invest hugely in nurturing a grand narrative of their history as the bond among citizens. Given the immense diversity among Indians in their regional histories and languages, what are the major bonds that can hold the nation together? Indian leaders have often tended to define pragmatic interests such as economic development as sufficient for such a grand narrative of nation. Secularism (itself an import from Europe where it emerged as an antidote to heavy handed Christian exclusivity in governance) is seen as the defining Indian narrative. But secularism is not specific to any particular people and nor is economic prosperity. The national narrative needs pride, a shared sense of historical greatness, and philosophical ideals that under-grid the diverse cultures on the surface. My research proposes that while many factors are important, India must better appreciate its deep rooted philosophy as a core unifying factor. The book "Breaking India" explained threats to the unity of Indian identity stemming from certain powerful foreign nexuses in league with their supporters inside India. The next book, "Being Different" showed why our distinction from other civilizations matters, and what some of the key elements of difference are. My most recent book, "Indra's Net", being released during my visit this month, takes the threats and my solutions to them further. It explains how the philosophical unity of Indian thought is being attacked in a very sophisticated manner and how this has taken root within India's own intellectual circles. It provides a rejoinder to claims that India had no pre-British sense of a common philosophical base. It argues systematically against allegations that a spiritual/dharmic sense of unity was artificially created by Swami Vivekananda under British influence. This book links philosophy, history and contemporary politics. Hence this argument is relevant in today's public debates on who we Indians are, though I have not seen the media take up these ideas in the same way. Many of my ideas are disruptive of the prevailing discourse on the nation, the intent being to influence the future trajectory.
Posted by shivoham at 8:21:00 PM